Perform ticket-level actions when replying to end users via email

Till now, 2 way email integration has allowed for staff responses to be added on a ticket, by merely replying to the notifications that staff members receive via email. This is beneficial for staff members or help desk agents in the field, when it may be difficult for them to actually make use of the web interface, to stay updated of new tickets and respond where needed.

With email being directed to their mobile devices, staff responses via email ensure that:

– the ticket within Helpdesk Pilot is appended with the update

– the response is sent to the end user, as an email

Helpdesk Pilot is now even more mobile-device friendly, as staff can now perform ticket level actions when replying to end users, via email. These actions include changing a ticket’s status, priority or the assignee (staff member to whom the ticket is assigned).

Be it via a Blackberry, iPhone, Android or any other mobile device capable of receiving and sending emails, staff members need to make use of a simple set of tags to perform these actions:

where [action] could consist of a combination of status, priority or assignee changes.

Let’s have a look at how a ticket’s status can be changed, through this example.

John Doe sends in a request and Pulkit Sankhla (from the Helpdesk Pilot Team) is notified of this ticket via his iPhone, since he’s currently on the move. 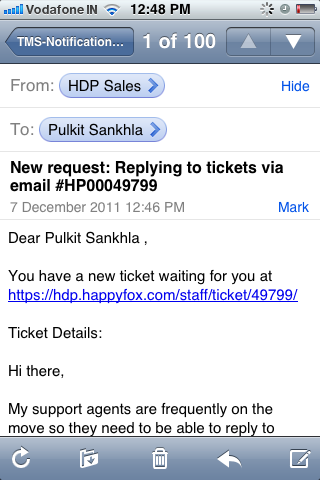 If Pulkit had accessed this ticket via his staff interface, this is how the ticket would have been displayed, in it’s current NEW status:

Now, Pulkit’s keen on responding to John as early as possible, so he taps Reply on his iPhone and begins the response with the action tag: 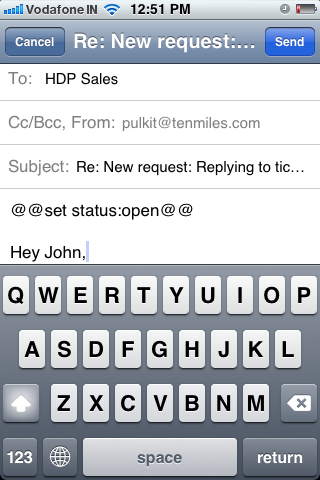 If we now look at the ticket display, within the staff interface, we can see that the reply has been appended (after removing the action tag from the message body) and the status changed to OPEN.

In such a way, the tag used can be extended to include status, priority and assignee, as required. For more details on how these tags can be used, please visit the Notifications page within your admin’s Manage section, or simply get in touch with us.

The ability to perform ticket level actions via email offers more capabilities to field agents and makes for more efficient ticket management, when on the move. Leave a comment and let us know what you think of it!

Aside from overall enhancements and better workflows, V 4.4.5 incorporates a number of new features, that are bound to add even more efficiency to your help desk operations, such as:

2 way email parsing
Till recently, help desk staff would need to access their relevant Admin/Staff Panels to view and respond to tickets.

You have to admit, that’s a pretty cool feature to have, right?

Multiple member participation
Often, a customer may CC multiple recipients in an email that he/she sends in to your help desk. A ticket would be created, identifying the Mail Sender as the Customer and all communication between your help desk and that particular customer would be appended to the ticket in Helpdesk Pilot.

However, responses sent in from any of the CC’d recipients would create new tickets.

Version 4.4.5 takes care of that by allowing multiple participants on a single ticket. As long as the ticket ID is present in the email’s subject field, Helpdesk Pilot will append responses from any of the recipients (in the CC/To field of the customer’s initial email) to the ticket.

If you’re making a purchase now, you’ll be shipped the latest release.

Existing customers can download the upgrade by accessing their accounts on the Priority Support Portal. (Please check your inbox for an email from The Helpdesk Pilot Team with details on how to upgrade your current installation)